On Oct. 6, 2021, Rigetty and Supernova Partners Acquisition Company II, Ltd. (SNII) announced the merger. When the transaction closes, the publicly traded company will be named Rigetti Computing, Inc. and its common stock is expected to be listed on the NYSE under the ticker “RGTI.”

We distinguish this transaction from many others for the following reasons:

1. The world is faced with the emergence of huge amounts of information. By 2025, the volume of all data worldwide will be 163 zettabytes (ZB). This is 10 times the total amount of data as of 2016. The prediction was published in a report by analyst firm IDC, Data Age 2025.

2. Because of the large amount of information, it is becoming increasingly difficult to process it and give accurate «binary» yes-or-no decisions. Models and predictions are becoming more and more probabilistic and dependent on chance. Source IBM.

3. Consequently, the global cloud market will grow by 17.5% annually and will more than double by 2025, to $832.1 billion. Source: marketsandmarkets 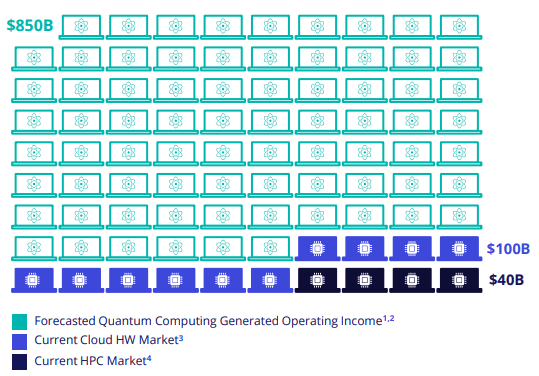 The growth of computing power is largely due to the construction of new data centers, the expansion of current ones, as well as an increase in the performance of computing equipment.

The growth of computing power is largely due to the construction of new data centers, the expansion of current ones, as well as an increase in the performance of computing equipment.According to studies and comparisons of conventional computers and quantum computers, quantum computers perform complex tasks hundreds and thousands of times faster.

In 2019, Google’s quantum Sycamore completed in 200 seconds a task that, according to Nature, would take 10,000 years for a modern supercomputer.

Thus, one data center with quantum computers can replace hundreds of conventional data centers. And it seems to us that this is the most likely scenario for the development of the cloud computing market, rather than the constant construction of new data centers. This is also due to the production limitations of conventional processors. In other words, quantum computers are a natural step in the evolution of computing solutions to support the ability to process growing amounts of information without extensive expansion of data centers.

Drivers for the industry.

When probability and randomness calculations are needed, traditional computers are not as efficient. However, this reveals the full potential of quantum computing. We believe that humanity’s transition to an active phase of space exploration, the development of personalized medicines, and the need for greater information security will be the main driver for the transition to quantum computing. In addition, commercial companies also need to predict consumer behavior and shape demand.

After the merger, the company that creates the first commercial quantum computer in the UK will be valued at only $1.5 billion. By comparison, when there were rumors about Amazon’s AWS spinn-off, it was valued at about $500 billion.

The most unique thing about Rigetti is the proprietary modular architecture of quantum processors. Using this technology, multiple quantum chips can be combined into one and thereby increase their power. 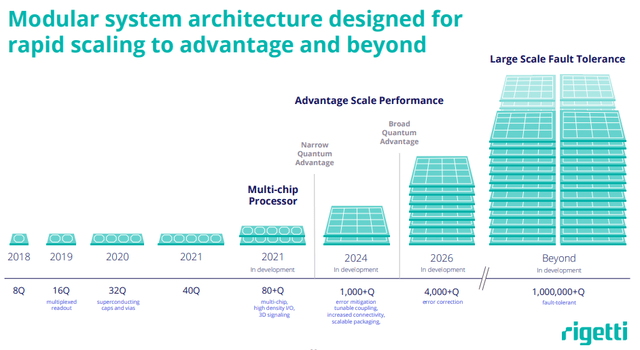 Rigetti is the lead industry partner of a US Quantum Information Research Center.

The company attributes active business growth and expansion of its customer base to the launch of Quantum Computing as a Service (QCaaS) for end users. And based on the data in the presentation for investors, Rigetti plans to approach the start of this project with a strong cash position.

Although the company has not generated meaningful revenue from its product, the demonstration of efficiency, the huge addressable market, combined with proprietary developments make the company attractive for investment.

Investors are demonstrating high demand for quantum computer manufacturers. In particular, Rigetti’s direct competitor, IonQ recently completed a merger and is trading at a valuation of $3.1 billion. The stock price has risen from $7.19 to $19.8 per share in the last month.

Observationally, most SPACs dip below $10 a share after the merger, but the most promising stocks soon renew their highs.